2017 differentiated itself from past years of running in that it was time to go after something other than a fast marathon. Having dabbled in the 50k distance over 8 times and finally placing in my age group in December 2016 at the Seashore 50k, and qualifying for Boston in early 2016 at Emerald Isle with a 3:20 and then again in the fall at the Philly Marathon with a new PR of 3:19, it was time for a new challenge. And as my running partner Heather always says: "Go big or go home!" so we decided to go for the big one! A 100 mile endurance ultra marathon!

We would train for 24 weeks for that event and it was a very different experience than marathon training. In the end, after countless 60 and 70 mile weeks with the occasional 80 mile week, we were ready!

We showed up, we conquered and met some great people along the way! Friendships that will no doubt last for many years to come!

2017 proved a strong year in running. While I had to deal with the normal aches and pains of putting my body through a mountain of stress from training, I remained injury free for the entire year, allowing many of my goals to come to fruition!

A surprize goal that popped up on us just about a week after completing the Yeti 100 event was a challenge thrown out there by its RD, Jason Green. "Run all 4 Ultra distances (50k, 50 Miles, 100k, and 100 Miles) by the end of the year and earn a Yeti Jacket!

At this point Heather only needed to complete a 100k to qualify for the challenge as the 50k and 50 mile distances were part of our 100 miler training in which we did those as part of organized events, so there was official record of these as proof. I on the other had needed both a 100k and a 50k as I dropped out of the 50k tune up race due to nausea (and a bad attitude) have into that event.

Heather and I both went out to the Croatan National Forest and ran the Tideland 24 hour to grab the 100k and then she accompanied me at the Nutcracker 6 Hour endurance event in Dunn, NC to help me grab the 50k I needed to qualify! We got it! But as a crazy turn of events in THAT event... we both ended up staying for the entire 6 hours and both took home overall awards. Heather, first place female and I, 2nd
place male!

Yeti Jackets have been ordered and are on the way shortly!! We will wear them proudly!! 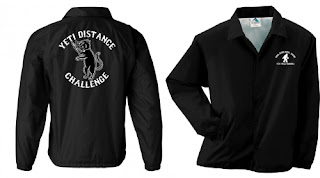 The last big goal of the year is reflected in the elevation stats over last year! Living in a very flat area you don't see many runners accumulating much elevation. Here... you have to go after it, you have to want it!
speedwork in disguise! Builds endurance and stamina and increases VO2max!

Heather found a challenge on Strava! 2500 meter run climb for the month of December! Translating that to feet, it would be just over 8,202 feet.

My first first thought was this was going to be very hard to achieve because of the logistical effort that we to apply to it. We pretty much have to drive to run any elevation and with time restrictions during the week, it isn't always possible to make happen. None-the-less, Heather was determined we could do it... so since I ultimately would be trying to achieve this goal with her, I signed up as well!

Day after day, run after run throughout the month we meticulously went after the elevation, foot by foot, climb by climb, hill by hill. Monotonous at times.. we chipped and chipped away!

Ultimately achieving the goal a full two days before the final day of the challenge!! We crushed it, gaining more that 600 feet over goal!

For sure a marathon in March, a 50 Miler in June and we are hoping to back to Yeti for a go at a sub 23 hour 100 miler! other than that... we can be found running the streets of Manteo and the hills of Nags Head 6 days a week!

“The will to win means nothing without the will to prepare.” “Running is the greatest metaphor for life, because you get out of it what you put into it. ” “We all have dreams. But in order to make dreams come into reality, it takes an awful lot of determination, dedication, self-discipline, and effort.” - Unknown 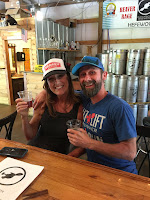