I Am NOT Amazing!

By Shane - November 14, 2019
I've been on this journey of fighting cancer now since January of 2019. I don't see an end in sight yet for a life void of cancer, for me.
I am hoping that one day I will be cancer free. That's a very BIG hope. But hope is all we have. Hope... is all I have.

Like all events that come into our lives, expected or not, we all have to deal with them and we all deal with them differently and on our own terms. The struggle is real for all of us, be it cancer or other illness, relationships, financial issues, jobs and careers problems, etc. You name it. We are all going through something.

Life is full of setbacks, heartbreaks and disappointments.

Despite all that. Life itself can still be good. Even great if we decide to take that path. It's all in our attitude, our disposition and how we respond to these events that sometimes just pop up out of nowhere.

WALKING THE SOUTHERN SIX... WITH MY MOM! 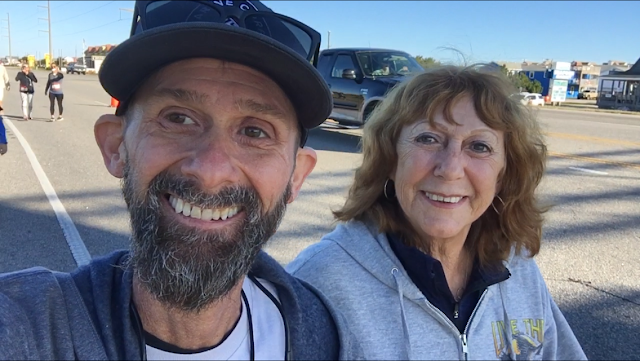 All great ideas have to start somewhere.
This one began Friday night at Poor Richards when Heather threw it out there that my mother and I should walk the Southern Six.
"Hey, that's a great idea!" I said in return.
After some careful consideration, my mom [Kathy] agreed that she would do it too!
Why didn't I think of this before... oh yeah, because Heather is way smarter than me! Which makes me a pretty smart man when you begin to think about it!  I had originally hoped to have the privilege of putting medals around some of my friends necks at the finish line. My mom would meet me over there before the Incredible and Most Gorgeous Half Marathon 2 Hour Pacer, Heather Gardiner came through the finish line! :)
This idea seemed much better!
My mom, Kathy Wronka is seventy years old. While she is pretty active in her local gym and does quite a bit of walking on the treadmill, she has never participated in an organized event before and she has never earned a finisher'…
Post a Comment
Location: Manteo, NC 27954, USA
Read more

MCM - The Prequel
As I approached mile 23,  I had already been struggling! It had already become clear that my first attempt at qualifying for Boston had failed.
It was at that mile Heather passed me. She did an about face and was now running backwards, smiling and yelling to me.. “Fight for  it, Shane!”
This was in September of 2015 at the Erie Marathon in PA.
At the time, I had no idea how significant these words were and what they would mean to me  just a few short years later as I was diagnosed with stage 4 colon cancer. With Mets to my liver and lungs and other areas in my body.. “Fight for it, Shane” would become the life or death mantra I repeat to myself often. And I often see that moment in my mind of Heathers epic about face during that marathon! She was SO strong that year.
In March of this year, 2019 Heather jumped on the rush registration of the Marine Corps Marathon (MCM) And had texted me at work to remind me as well to register.
By the time I got on, the limit of registr…
Post a Comment
Read more
More posts